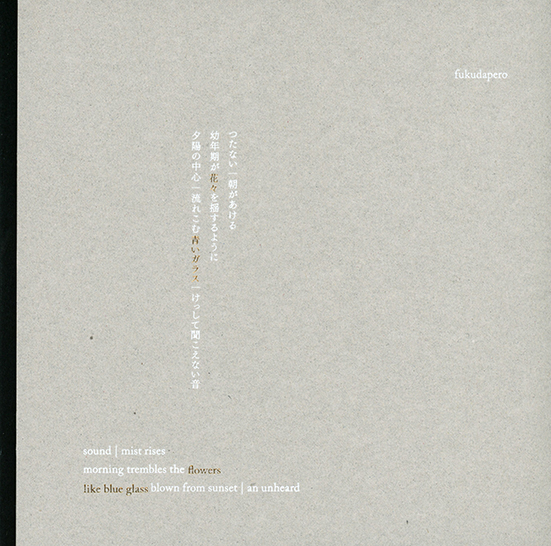 fukudapero’s ‘dualingual poetry’ is perhaps not technically translation all. In this collection, Japanese and English do sometimes run in parallel, yes, but they also mirror, follow and shadow each other; they sit inverted, askew, even at cross-purposes. It might be difficult to work out what the precise relationship between one text and the other really is, except that the poetry does give the reader a clue: ‘all relationships are tilted’. In the end, it doesn’t matter. This is a lesson in how two languages can be brought together beyond staid binaries.

Or to be more precise, the ‘quiet protest’ this poetry stages goes against these binaries; against notions of how languages should behave with each other; how they should appear, or where, on the page; against the idea of a ‘line purer than mid-winter mackerel’ (the line in question being cut through by the page crease), while apparently also being for the same idea in the carefully balanced, minimal phrasings. Any convention that privileges English as a target language in translation is promptly knocked on the head by a sudden excursion into Arabic, or the refusal to translate at all.

The poems in flowers like blue glass don’t say more than they have to. Or they say things in more than one way—which is where the poet’s experience as artist and filmmaker come into it. These are poems of ‘quiet protest’ but also quiet as protest in an audibly and visually noisy world. The empty space on the page is always in play, perhaps even as a third (or fourth) language, the language of the ‘unheard’. Somewhere between the world’s sensory, technical and emotional clutter, poetry like fukudapero’s carves out the terms by which it wants itself to be understood and from where it can listen: not by delineating fixed territories of engagement, but by being on the move, precisely in order to avoid having these certainties imposed. ‘if we are | taken as a chair’, he writes, ‘we will be sat on, if we are taken as a table we will be set, if taken as | a spoon we will be bent. so we must pretend we are none of them.’

There are no reviews yet.

Be the first to review “flowers like blue glass” Cancel reply